Ennismore is set to debut the SO/ brand in France this July with the opening of its new flagship, SO/ Paris.

Taking up residence within the Morland Mixite Capitale complex in the fourth arrondissement, the 162-room hotel will comprise a restaurant/bar/club, a Spa Maison Codage and fitness centre, and a swimming pool.

The structure, which once housed the Seine administrative center and has until now been closed to visitors, will become a living, working and relaxing space open to all. Winner of the Reinventer Paris award in 2016, the project is being carried out by Emerige in conjunction with David Chipperfield Architects and CALQ Architecture, with landscaping by Michel Desvigne. The resulting scheme comprises offices, residences and a youth hostel, as well as a food market, urban agriculture, an art gallery and a bar and restaurant on the top floors – the latter will offer views over the Seine and Paris’ Left Bank. Parisians and visitors to the capital will also have access to over 11 retail stores on an interior street linking Boulevard Morland to Quai Henri IV.

Honoring the setting on the Seine riverbank, between Notre-Dame Cathedral and the Place des Vosges, Bastille and Marais, an architectural agency RDAI has opted to emphasize the nobility of the hotel’s interior design by using natural materials such as leather or wood wherever possible. With the choice of furniture, RDAI has also been elected to offer a range of movable elements linked to the property’s urban character.

Designed by Guillaume Henry, rising fashion star and Artistic Director of fashion house Patou, the uniforms of SO/Paris draw inspiration from the cinematic universe of Wes Anderson, the Louis de Funes film The Little Bather, and the Kodakettes. Henry’s garments are both comfortable and fun, created for people on the move.

Omnipresent within the hotel, between the Seine river and the Arsenal basin, water is referenced through oilskins, denims and striped sailor sweaters. Unheard of in hospitality, mesh appears on uniforms. There are also Parisian references like fitted blazers and faille puffball skirts. Henry has designed the hotel’s emblem too, which is reproducible in embroidery around themes of the lighthouse, the Fresnel lens and waves.

A supporter of the arts deeply committed to contemporary creativity, Emerige is an initiator and signatory of the “one building, one creation” charter and has pushed the boundaries when it comes to integrating art into architecture, fashioning SO/Paris into a playground for young and emerging artists of the French scene.

On entering the lobby of SO/ Paris, guests are welcomed by an illuminated tondo specially commissioned from Ne”il Beloufa, an internationally recognised French artist whose works have been exhibited at MoMA in New York and at the Center Pompidou and Palais de Tokyo in Paris . The luminous resin piece depicts an arrangement of flowers, leaves and water in bold colours, with an aesthetic reminiscent of illustrated albums. The thick layer of resin hides further surprises, concealing debris such as cardboard carrying-cases for beer, pizza boxes, packaging. Here, Ne”fl Beloufa is making a comment on the ‘throwaway culture’ by integrating these items of rubbish into his work, and by doing so is suggesting a poetic solution to the recycling problem. 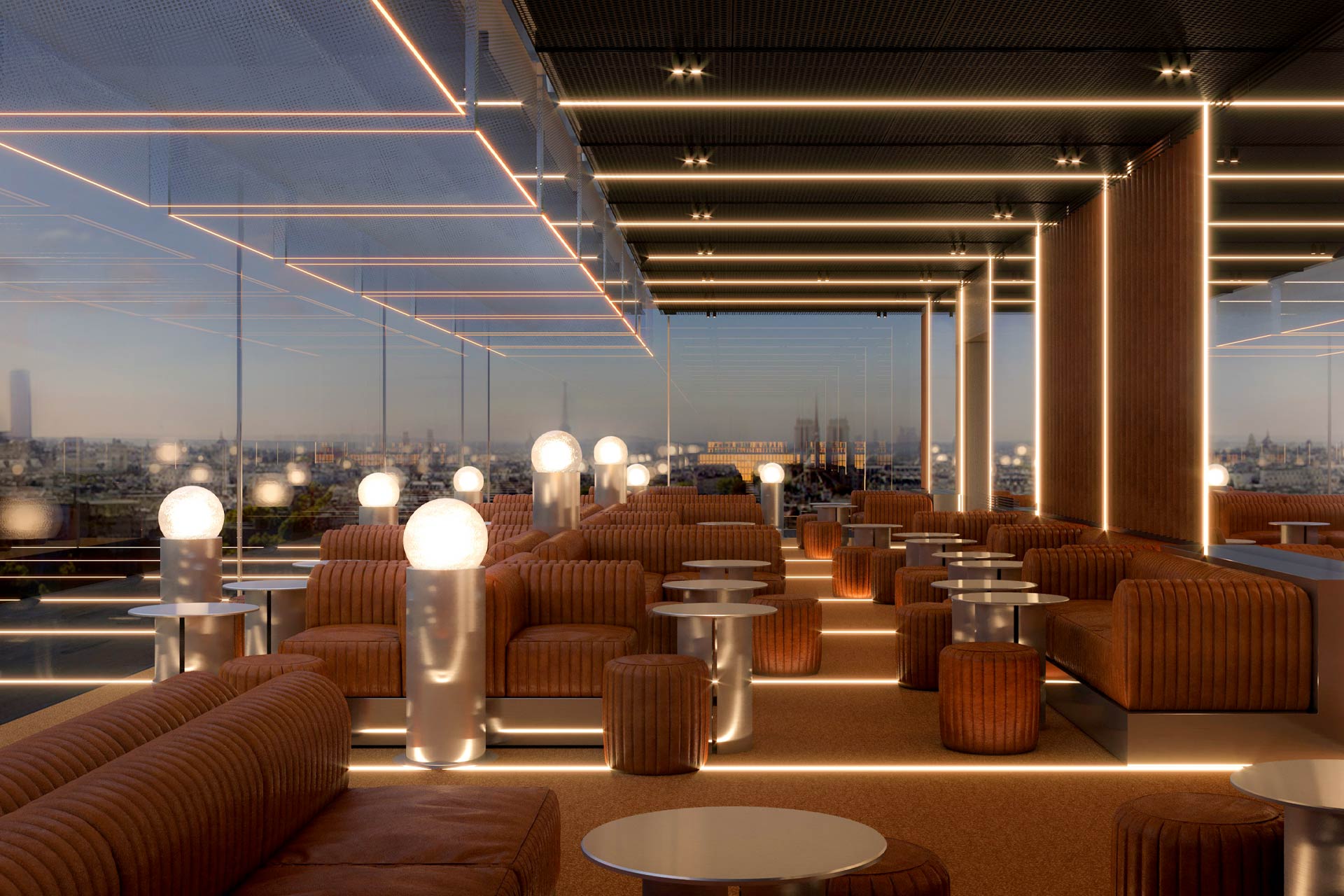 In addition, SO/ Paris has commissioned artist Thomas Fougeirol to create a group of 113 photograms and five photomontages for the guestrooms and suites. These are inspired by his strolls along the Seine, from the Sully Morland neighborhood to the Trocadero. Fougeirol has created a giant urban inventory scattered around the private areas, using his sense of color and kaleidoscopic montages for the powerful ensemble.

Finally, The Seeing City – an installation designed by Olafur Eliasson and the Other Spaces Studio – has transformed the bay windows of the restaurant and bar facades, situated on the 15th and 16th floors, into a machine for the mind. On the 15th floor, a horizontal plane mirror duplicates the scenery, inverting the viewer’s perception. The mirrored ceiling continues this effect from the exterior of the restaurant to its interior, across a wall of glass. On the 16th floor, a series of kaleidoscope boxes edging the facade reflecting the heavens, transporting fragmented and reassembled images of the surrounding sky into the interior. Created by artist Olafur Elfasson, co-founder of Other Spaces Studio, these immersive works appeal to the senses.

Spread between floors 7-14, the hotel’s 140 guestrooms and 22 suites offer views over the Paris rooftops, the Seine, and the capital’s landmarks, with interiors fusing bold colors and timeless decor. Accommodation categories range from 25m² to the 128m² SO Paris Suite, which features two double bedrooms and balconies. 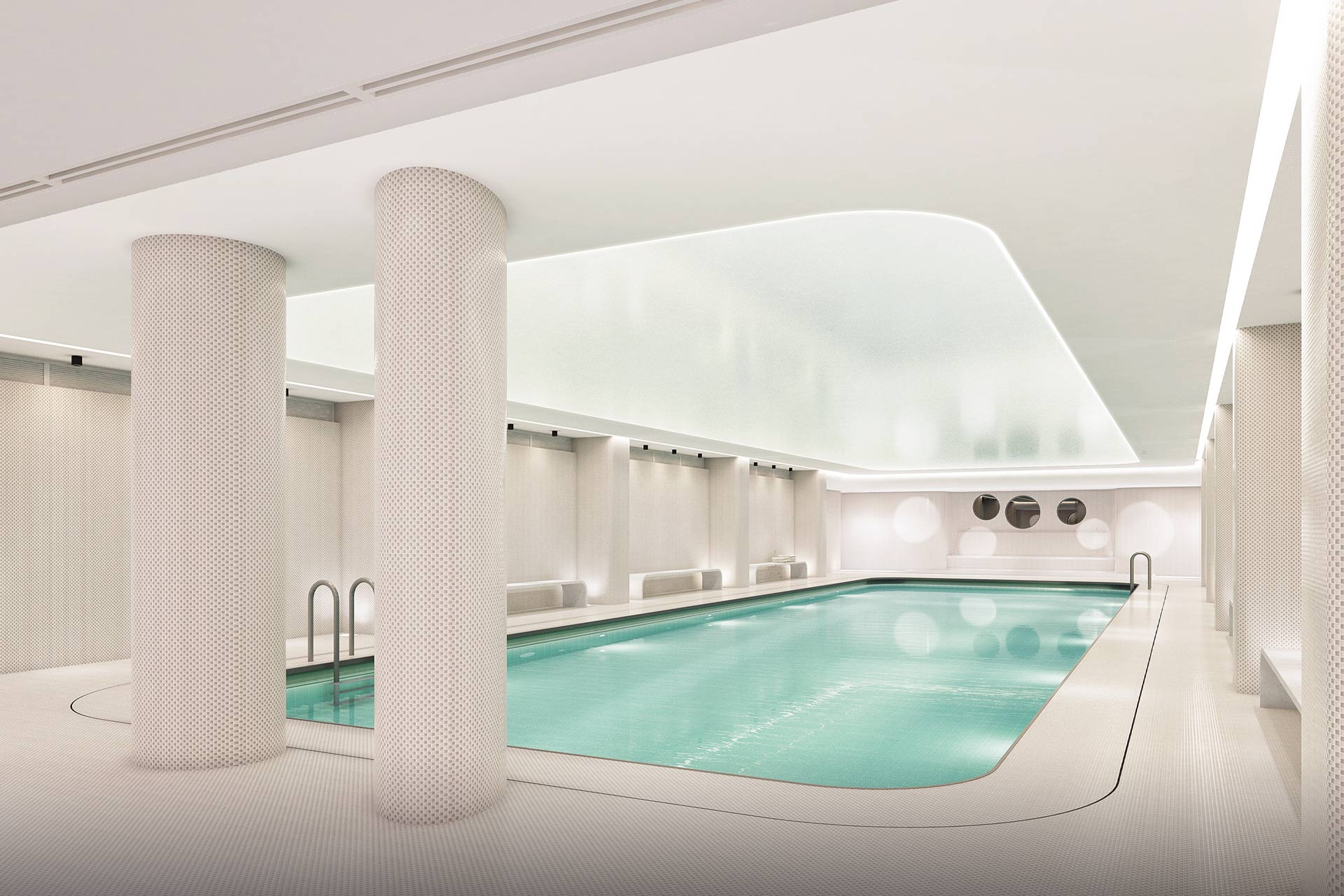 Signature restaurant, bar and club ‘Bonnie’ – operated by Paris Society – has been designed by Jordane Arrivetz of Notoire Agency, whose scheme blends curved edges, luxurious textures and bright colors that pay homage to the 1960s and 1970s. Spanning the 15th and 16th floors, the venue will afford 360° city views.

The hotel has also partnered with Codage Paris for its wellbeing experience, with the French brand creating bespoke procedures based around the sensibility of Contemporary Apothecary. In keeping with the scheme, an artwork by Elsa Sahal welcomes guests to Spa Maison Codage, while both the treatment rooms feature a piece by Alice Guittard. Guests also have access to a gym and a 20x6m pool within Morland Mixite Capitale.

On the seventh floor, four meeting rooms totaling 200m² are flooded with natural light and can be used for fashion shows, pop-up shops and private functions. The bar and club are also available for exclusive hire.

The post Ennismore reveals design details for SO/ Paris appeared first on Sleeper.