Hirsch Bedner Associates (HBA) has unveiled the philosophy and design concepts behind the interiors of the newly-opened Hotel Indigo Suzhou Grand Canal.

For its central theme, the hotel drew inspiration from the famous 18th Century scroll painting, titled Prosperous Suzhou, depicting the city’s bustling urban life. The extensive project was a collaboration between HBA Singapore, who oversaw the design of the interiors, and its brand partners HBA graphics, Light Directions, and Canvas Art Consultants.

Associate & Lead Designer of the project, Sabine Beck says: “Every Indigo hotel revolves around a specific neighborhood story – we were very lucky to be able to draw from the rich history and culture along Suzhou’s Grand Canal to create a story with a strong sense of place particular to this hotel’s location.”

By conceptualising the journey of the Qing Dynasty Qianlong Emperor on an inspection tour of Suzhou, the design team wove elements from the vibrant sights and locations of the city into the different areas of the hotel, utilizing traditional materials, furnishings and artwork while maintaining a distinctly a contemporary look and feel. The final effect is one of both modern luxury and historical immersion, offering guests a fascinating introduction to the city’s 260-year history and a truly unique experience.

The journey begins in the lobby: heavy timber doors open into a vault-shaped entrance space, a nod to the iconic arched stone bridges that crisscross the city’s canals. Left intentionally underlit, the impressive architecture is accentuated by moving light reflections that play with the shape of the cavernous room and create glistening patterns on the underside of the ceiling, reminiscent of the rippling water around a boat traveling through the waterways of Suzhou.

The lift car, created in the image of the emperor’s Sedan chair that carried him around the busy town, is clad in dark mirror panels accented by contemporary lighting details, mimicking the panels the emperor would have peaked out from. The back wall is covered with a green lacquer panel that is shaped to resemble the drapery covering the sedan chair windows. At the center hangs a piece of artwork containing details from the famous 18th-century scroll titled Prosperous Suzhou, which depicts the hustle and bustle of the old town of Gusu, one of Suzhou’s ancient urban districts and a key business centre.

A large white ribbon stretches throughout the neighborhood lobby, leading guests’ eyes from the view of Suzhou’s skyline to the playful interiors. Lighting integrated into the ribbon changes in color as it morphs from the reception table into a silk-like thread that touches the ceiling before wrapping around a cluster of furniture on the floor. The rippled metal ceiling gives a subtle nod to the omnipresent waterways of Suzhou’s old town, the lifeline of the city’s trade. The woven details integrated into the furniture design are bold, with bright yellow and green accents representing the soft colors found in the local flora of Suzhou’s gardens. The carpet features a pattern outlining an old map of Gusu. 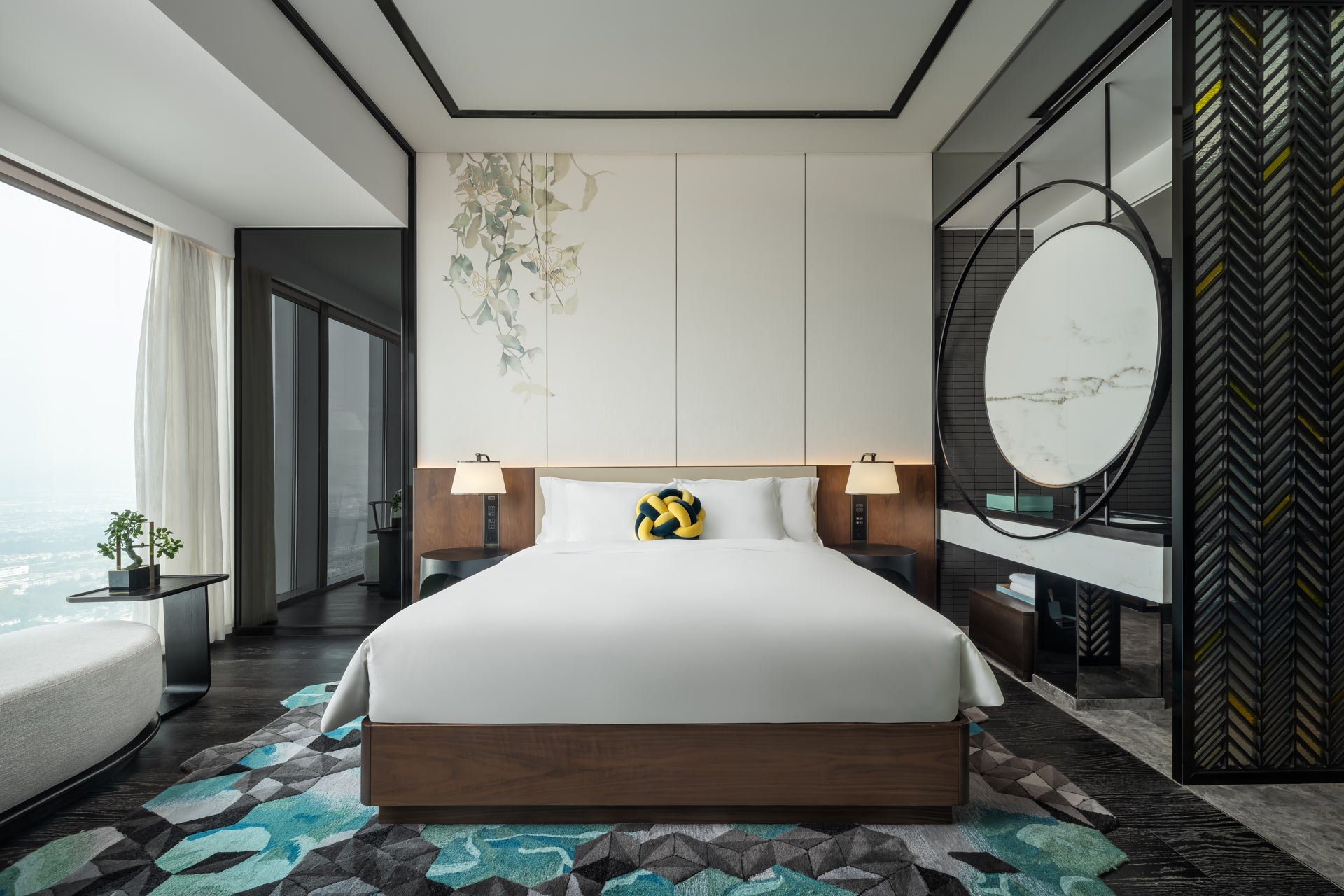 The guestrooms’ architecture applies some of the principles of Suzhou’s exquisitely planned gardens, offering a combination of filtered and framed views in different areas of the space. Lifting inspiration from the silhouettes created in a traditional Chinese screen, the ID team incorporated screens with coloured glass inserts to filter the views to the bathroom, serving to both offer privacy and create a distinct contrast in lighting between the two rooms.

The room’s hues are drawn from the materials traditionally found in Suzhou’s classical gardens, which were meticulously designed as a microcosm of the natural world. A contrasting base palette of bright walls are accented by black silhouettes, while the timber used throughout the space is textured and rustic with a tactile open grain as if taken from the traditional buildings in the gardens. The bathroom walls are inlaid with local gray bricks, contrasted by black and white stones in the island vanity and shower. The artworks by Canvas Art Consultants are similarly influenced by Suzhou’s gardens, focusing on the lotus flowers typically found floating in the garden ponds. Meanwhile, the furniture is composed of custom pieces designed with a contemporary take on old Ming-era furniture.

On the 46th floor, the PIER 46 Neighborhood Café and Bar offers vistas to the majestic landscape and the famous Cloud Rock Temple Pagoda through its 270-degree floor-to-ceiling windows. With the vision of bringing the hustle and bustle of trade and commerce along Suzhou’s old piers to life, the design team adopted local materials, such as brick and textured warm timbers, to set the base palette for the space. Full height screens separate the spaces into more intimate and private zones. The Ming-inspired furniture is upholstered in tan and green leather with stitching details on the back reminiscent of local silk embroidery. Separating the restaurant and bar area are tall sliding doors, giving guests the option to enjoy a bespoke cocktail in the bar or an elegant afternoon here. Seating groups are varied throughout the space: smaller clusters of chairs by the windows offer views over the city’s modern skyline and nightscape. Meanwhile, the design team worked with the Canvas Art Consultants to create the round, cocoon-like seating booths, encapsulating them in draping curtains composed of many thin metal chains that form an image of Suzhou’s ancient cityscape of traditional houses, offering a different perspective of the city.

The hotel’s three mid-size meeting rooms and one ballroom share a large pre-function area and are connected to the sky lobby floor by a grand feature staircase. Each space has been designed in the image of the main characters in a traditional Kunqu opera, with the colors and design language of the furniture, lightings, and carpets matching the character given to the room. 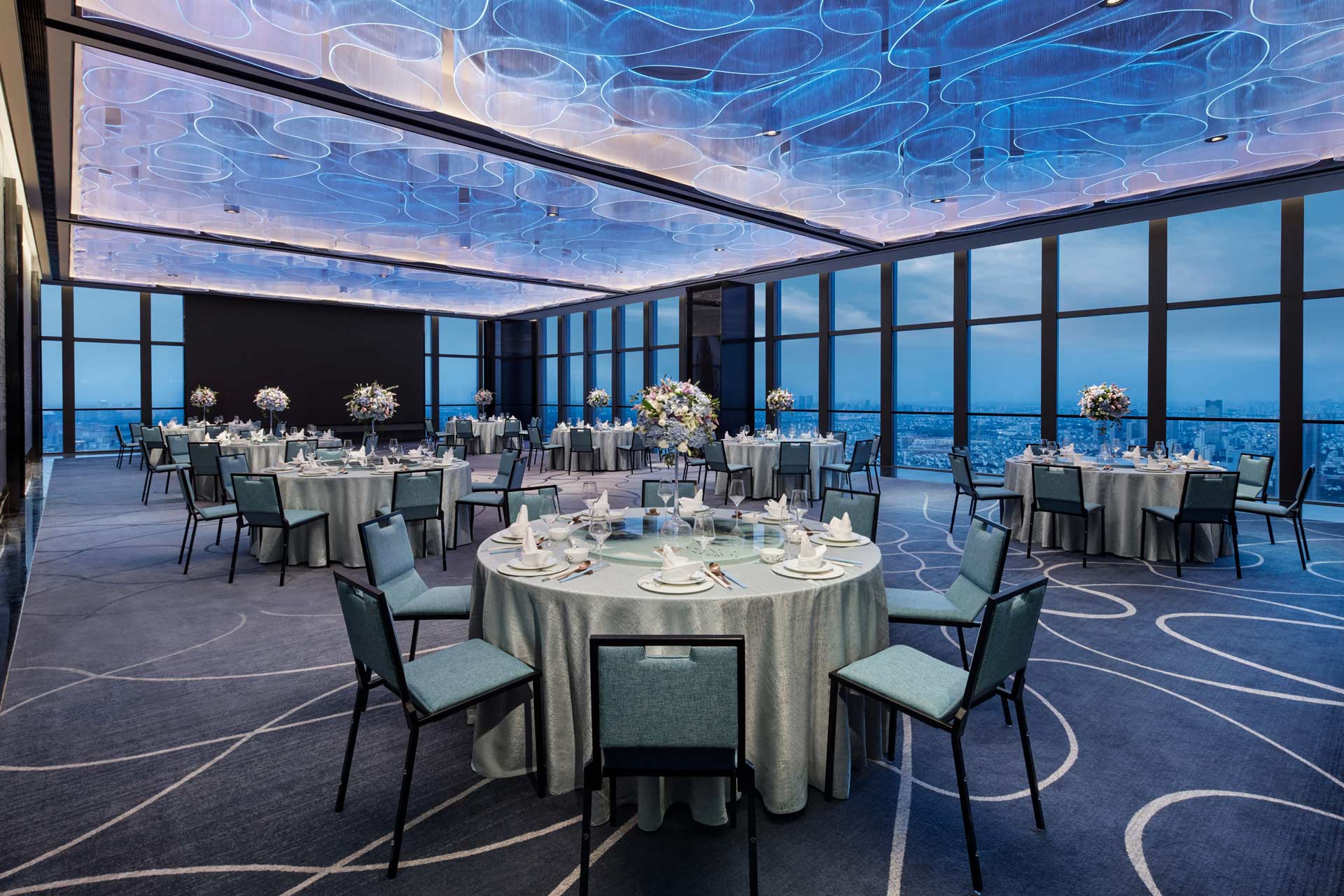 The pre-function area and ballroom represent the romantic male and female leads, called the Dan and Sheng characters, and maintain a neutral color palette that mirrors the costumes the characters wear. Lighting by Light Directions stretches across the ceiling in soft waves in the Ballroom, representing the long, sweeping sleeves of the couple’s costumes. This undulating chandelier is illuminated through backlit glass that changes between the colors of the couple’s traditional make-up and dress, creating a serene, magical atmosphere. Meanwhile, a stepped structure is situated below the main staircase in the foyer harkens back to an image of a traditional stage, giving guests who come here to sit, work, and have a break from meetings the sense they are watching a performance in old Suzhou .

The other two meeting rooms represent the characters of the clown, known as Chou, and the ‘painted face’, called Jing. As the clown character is typically dressed in a blue costume and painted with a large circle on his face, the meeting room created in his image features a blue curvy pattern on the carpet, which is repeated in the furniture and circular lights hanging from the ceiling .