The Grandeur of Penang’s Eastern and Oriental Hotel

Despite not being a chain hotel, the Eastern and Oriental (E&O) Hotel in Penang needs no introduction. It is to Penang as the Raffles is to Singapore and the Strand is to Yangon. And rightfully so. These 3 hotels were built by the same folks – the Sarkies Brothers – with the E&O actually being the oldest of the three. Part of a larger list of Southeast Asian heritage hotels that also includes Manila Hotel and Sofitel in Hanoi, the E&O as locals call it, brings a colonial touch to the already laidback and historical air of the UNESCO World Heritage town of Georgetown in Penang, Malaysia . 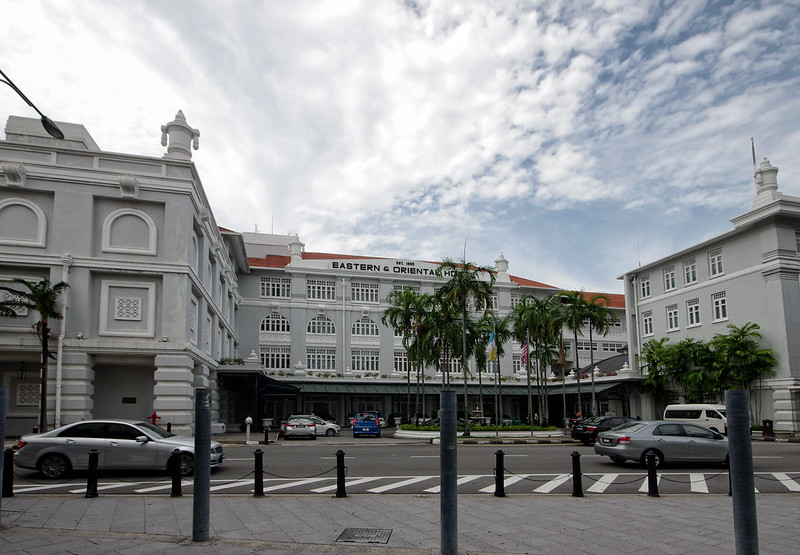 I stayed at the Eastern and Oriental Hotel, Penang following a short sojourn to Perlis and Alor Setar. As my last visit to Penang was some 6 years back, I wanted to spend some time to check out the new attractions in the old town, particularly the 3D art works that are scattered around the heritage area. The Eastern and Oriental Hotel is located at Lebuh Farquhar and is conveniently in what is considered the “buffer zone” of Georgetown. It’s also a short walk to some of the major sights such as the Cheong Fatt Tze Blue Mansion and the colonial-era municipal hall right by the padang. 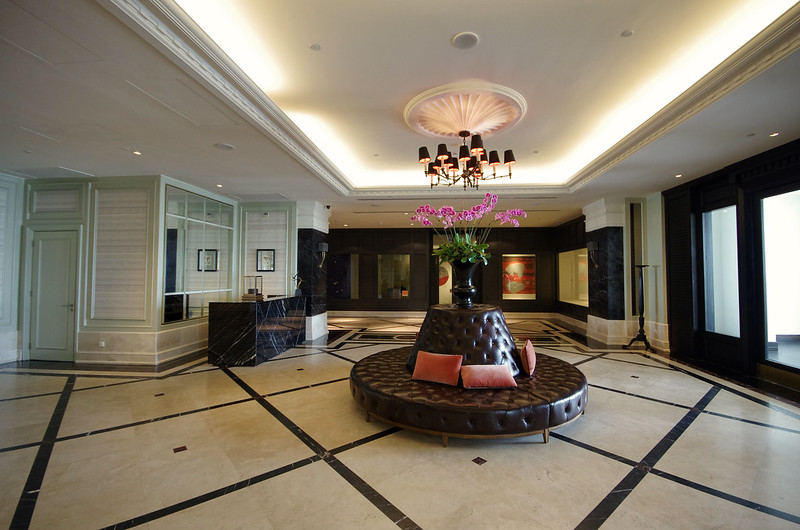 I remember visiting Eastern and Oriental Hotel, Penang some 9 years back when the only building was a low-rise whitewashed structure now known as the Heritage Wing of the hotel. I was already mesmerized then by the lavish interiors and the turn-of-the-century lifts which I no longer see in this part of the world. During my return, I did still find these things there but this is now supplemented by a taller and more modern building next door – the Victory Annexe. 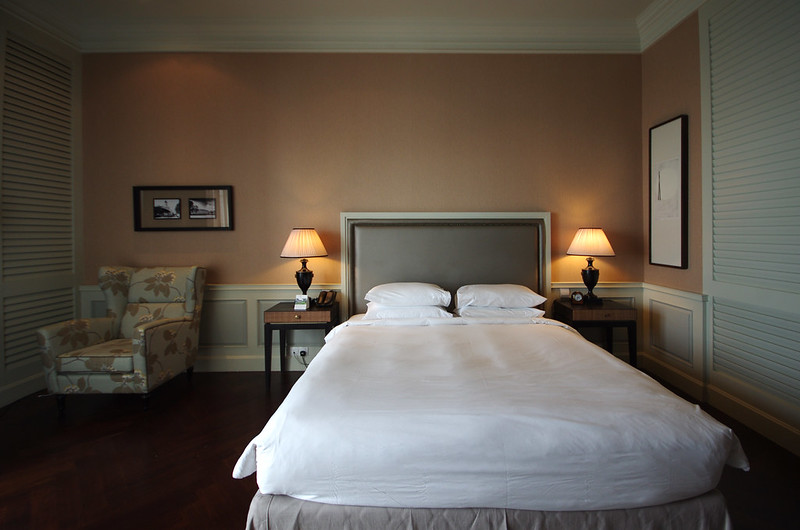 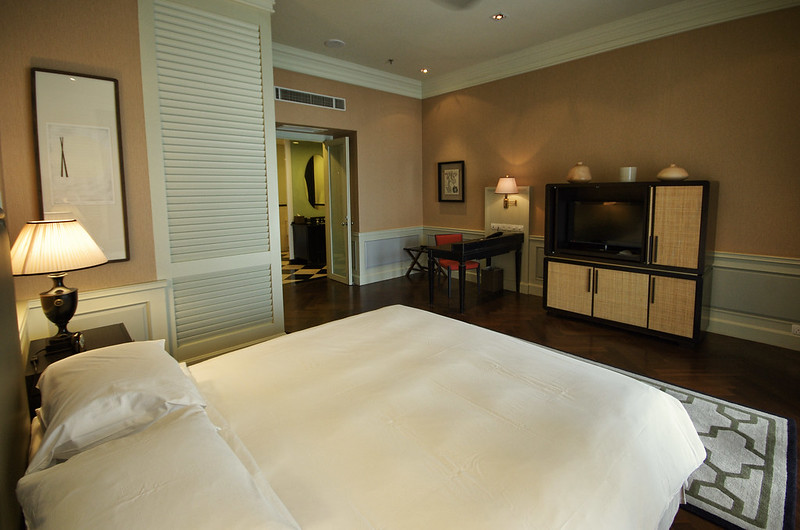 During my stay at the Eastern and Oriental Hotel, Penang, I was billeted at a Studio Suite category room at the Victory Annexe. Having just opened in 2013, the building looked obviously new without losing the colonial feel that the hotel is known for. The lobbies and public areas were still decked in white, just like in the Heritage Wing. Entering my Studio Suite for the first time, I was literally greeted by a breath of fresh air as the spacious balcony allowed me to savor the cool breeze from the Malacca Strait. At 55 square meters, my Studio Suite was a spacious affair with a reading desk, king-sized bed, and an armchair. I was relieved to find a flat-screen TV inside the room, a departure from that other heritage hotel – The Raffles in Singapore which until recently, had used a box-type TV for the guestroom. 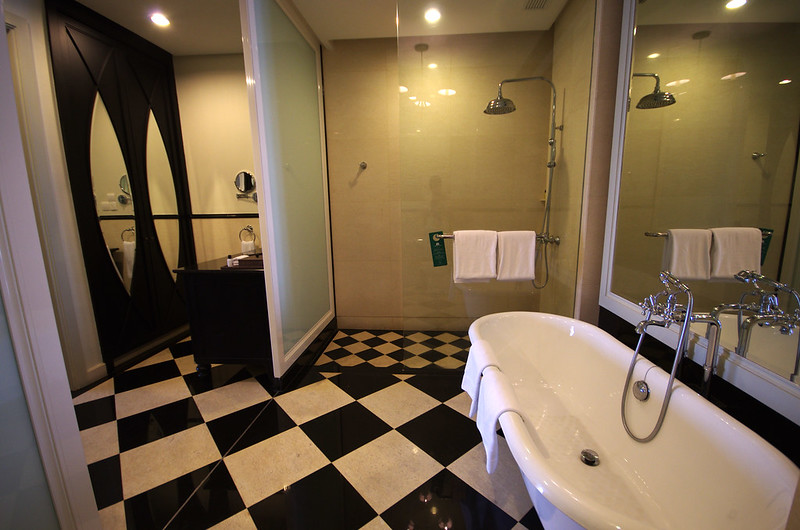 The bathroom contained a standalone tub and chessboard-tiled flooring that served as a throwback to the pre-WW2 era. With a his and hers sink as well as separate shower and toilet, it was generously sized for a bathroom and definitely deserves a thumbs up for its well-executed colonial design. 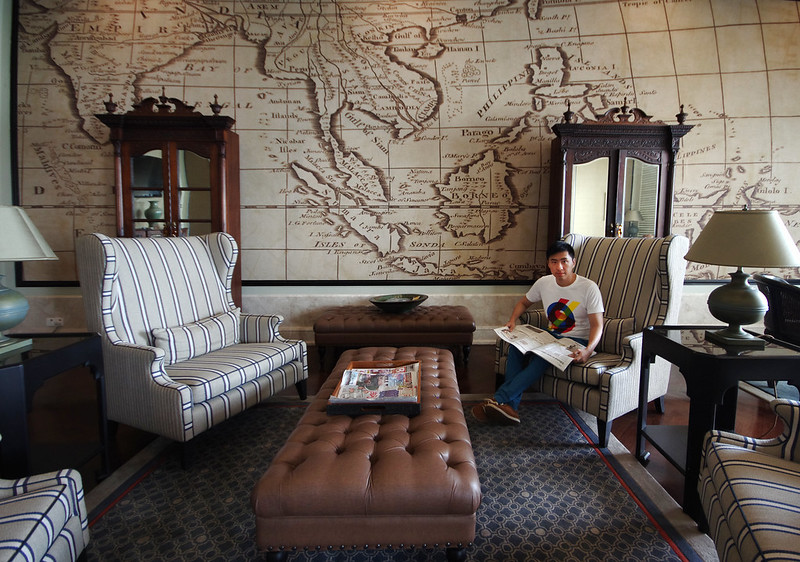 As a guest of the Victory Annexe, my stay came with access to the Planters Lounge which is exclusive for use by guests staying in the annexe. The said private lounge serves breakfast in the morning, evening cocktails at 6 in the evening as well as all-day tea and coffee. In style, it mimicked what Indiana Jones’ private study might have looked like if he had one, with an 18th century relief map of Southeast Asia on the walls, porcelain vases and other faux antiques filling the empty spaces as well as heavy wooden furniture guests to use. It is just the type of setup that’s sure to trigger anyone’s inner wanderlust. 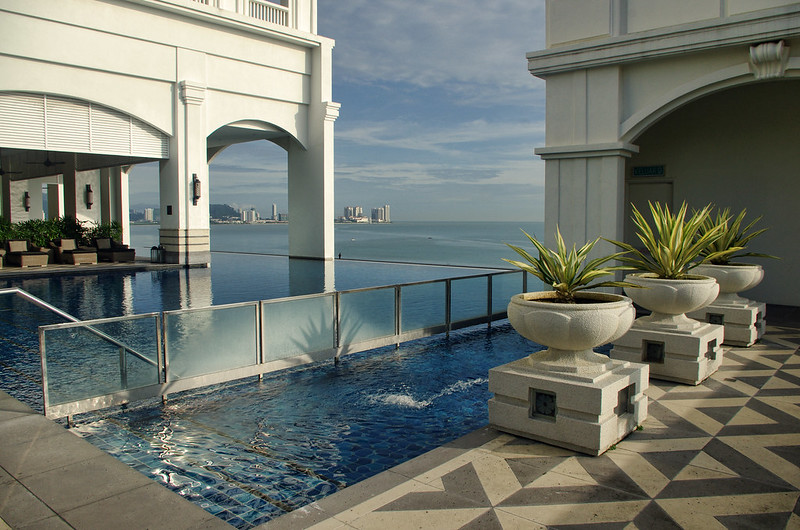 I also chance upon the hotel’s highly popular swimming pool during my stay. While the hotel has two pools – one in each wing – it is actually the pool at the Victory Annexe that attracts most of the guests. With an infinity pool setup, it offers sweeping views of the Malacca Strait so it can get a bit crowded in the afternoon. In order to use the pool without the crowds, an early morning or even early evening swim would be recommended.

At the same floor as the pool and Planters Lounge is the fitness center. It contains an adequate number of equipments for guests. Again, it comes with sweeping views of the sea, allowing for a relaxing and ambient workout. 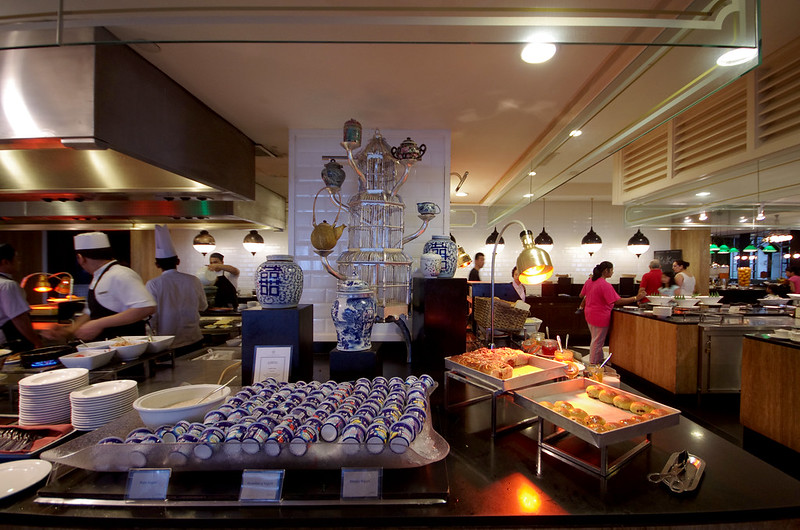 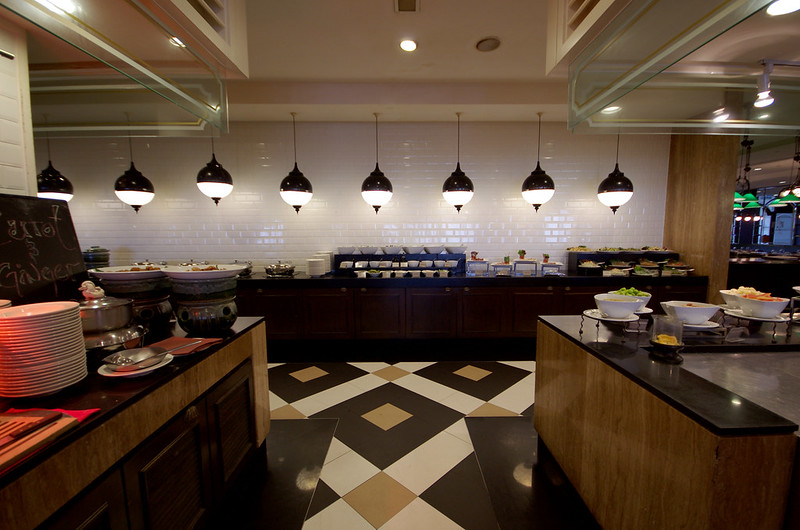 The breakfast buffet at Sarkies in Eastern Oriental Hotel, Penang offers a myriad of local and western dishes. While breakfast favorites such as sausages, scrambled eggs, pancakes and waffles, croissants and yogurt were offered copiously, I turned my attention to the local spread, particularly on the Char Kway Teow which Sarkies serves without lard in keeping with halal standards. To me, it’s a more guilt-free option compared to eating at the actual hawker centers outside. I must have eaten two plates of char kway teow during breakfast there. Yes, I liked it that much. 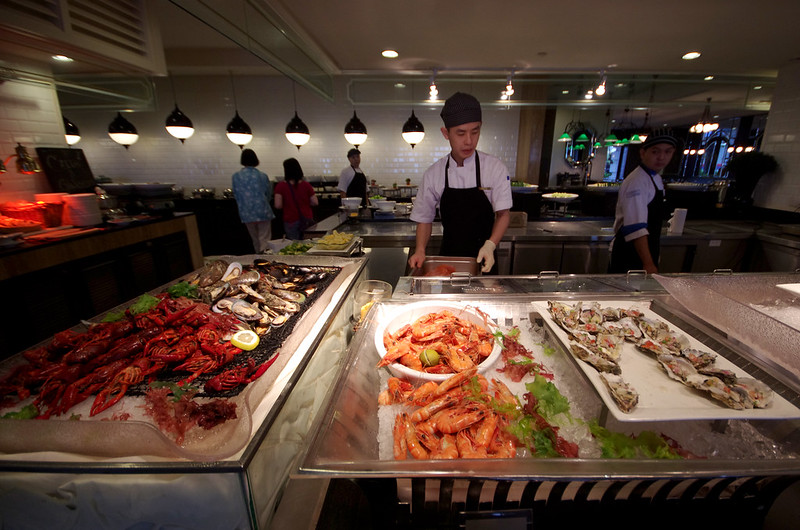 As mentioned, I also had the chance to dine at Sarkies for dinner. While I initially just expected a more refined or upgraded version of their breakfast spread, I was pleasantly surprised to find a 360 degree turn in their dinner buffet selection. It’s quite popular with locals as well as I observed that I was dining mostly with Penang residents during the Tuesday evening that I was there. The buffet’s overall theme was on seafood, particularly on grilled seafood. Personally, I thought it was an excellent theme given the hotel’s seaside location and since few hotels have buffets with a similar focus. 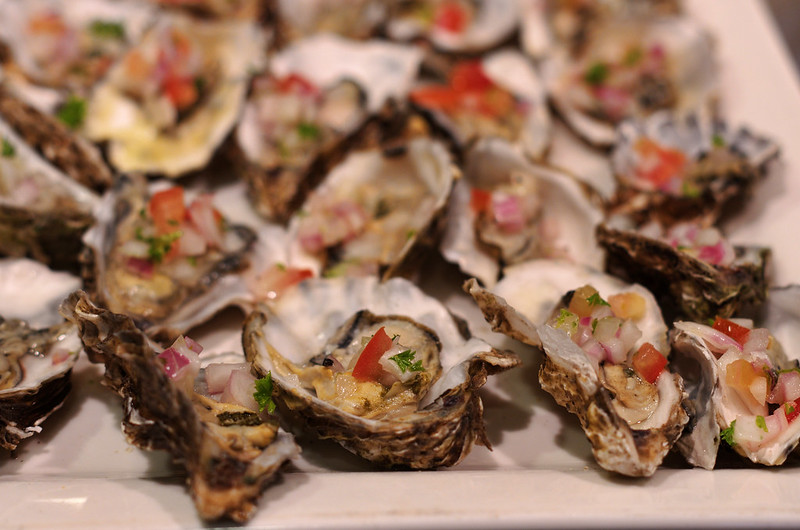 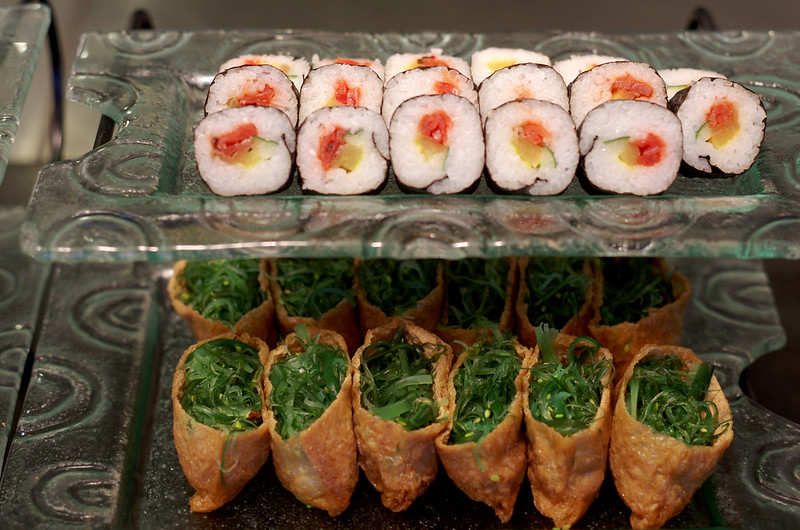 The seafood spread at Sarkies’ dinner buffet was so extensive that I could count the following: squid, mussels, clams, oysters, fish, prawns, crayfish, scallops, various types of sashimi and even stingray! Indeed, the hotel knew how to take advantage of local expertise when it comes to the food. 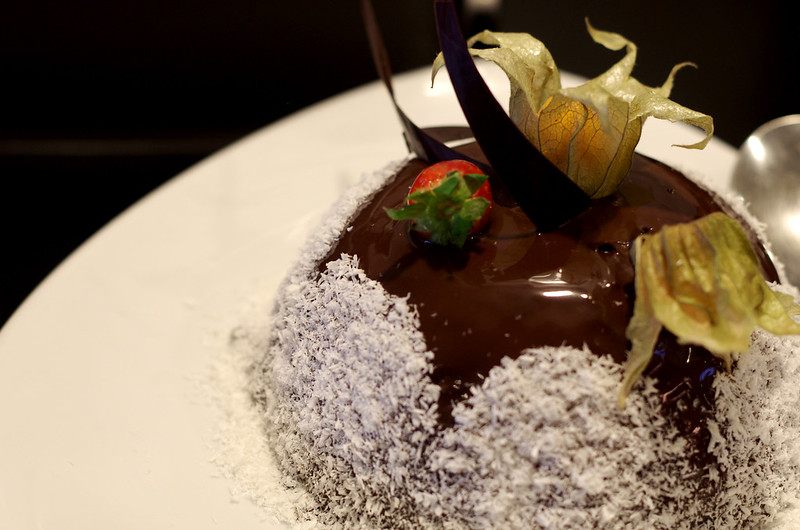 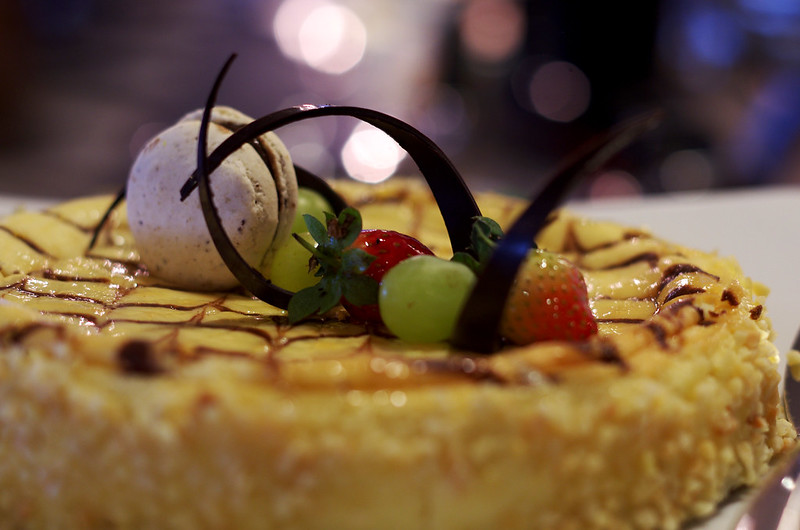 Another highlight at the dinner buffet at Sarkies is the roast duck which I must admit was one of the best I’ve tried within a buffet. Succulent and meaty, I could not help coming back for more.

Overall, it’s hard to go wrong with Eastern and Oriental Hotel when choosing for a place to stay in Penang. Considered an institution in the island, the property has plenty going for it such as:

I had a marvelous time at the Eastern and Oriental Hotel. Staying there made for a most quintessential Penang experience, I would say. With its distinctive heritage, I consider it as a large hotel that has the personality and uniqueness of a boutique property.