Centrally located in the heart of the vibrant city near the lively Avenida Paulista, Rosewood São Paulo, which featured in our top 7 hotels on the boards in 2020, is a metropolitan oasis set within the historical enclave of Cidade Matarazzo, a complex of elegantly preserved buildings from the early 20th century that have been carefully transformed into private residences, high-end stores and entertainment venues.

“Sustainable features executed in the property’s design, including 250 trees up to 14 meters in height placed vertically on the Mata Atlantica Tower.”

Anchoring the 30,000 square-meter mixed-used lifestyle hub, the hotel occupies the historic former hospital, Matarazzo Maternity, as well as a striking new vertical garden tower. The transformation of the heritage buildings is rooted in sustainability and makes Cidade Matarazzo Brazil’s largest upcycling project, with a focus on celebrating and protecting the country’s cultural heritage and natural environment. Sustainable features executed in the property’s design include a biodiversity program that repopulates the indigenous flora and fauna from the Mata Atlantica rainforest, including 250 trees up to 14 meters in height placed vertically on the Mata Atlantica Tower.

Spearheaded by entrepreneur Alexandre Allard, recognised for his involvement in the renaissance of the House of Balmain, and designed by leading international figures including the Pritzker Prize-winning architect Jean Nouvel and artistic director Philippe Starck, Rosewood São Paulo has been described as a love letter to Brazil, with a majority of the design materials both locally sourced and inspired by the country’s diverse culture. The new hotel is also home to a groundbreaking collection of 450 site-specific artworks, all created in partnership with local artists whose work draws from the multiplicity of the Brazilian experience. 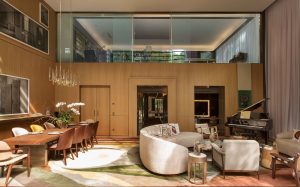 Featuring 160 guestrooms and suites along with 100 Private Rosewood Suites available for purchase, the hotel’s luxurious accommodations are spread across the restored Matarazzo Maternity and the vertical garden tower. Rosewood São Paulo has instilled new life into Matarazzo Maternity, which holds great symbolic significance and sentimental meaning to the city as more than 500,000 Brazilians were born there. As both an emblem of the city’s rich history and a beacon guiding its future, Cidade Matarazzo holds a central place in the hearts of many generations of Paulistanos. 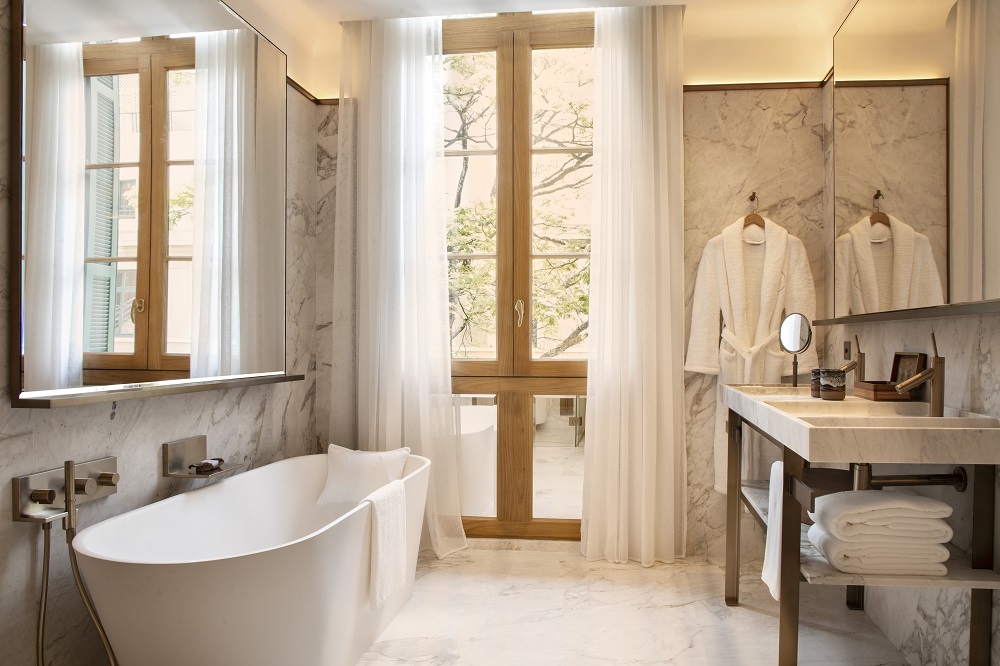 “It has been a true honor to help bring such a unique hotel project to life in one of the world’s most dynamic cities,” said Managing Director, Edouard Grosmangin, of Rosewood São Paulo. “The team behind Rosewood São Paulo has spent a decade on this project to ensure it honors and celebrates the heritage of the city while breathing new life into the destination. In doing so we’ve created a hotel that is a true love letter to the city, the nation, and its people. We look forward to welcoming the world to experience São Paulo’s dynamic offerings first hand and provide the place from which a cultural journey can begin and end.”

In line with Rosewood’s guiding ‘A Sense of Place’ philosophy, wherein the distinctive ethos of the destination is woven into the identity of the hotel, Rosewood São Paulo’s design was inspired by its deep Brazilian roots. Under the artistic direction of Starck, 57 Brazilian artists and artisans came together to produce a permanent collection of art featuring over 450 works. Treating the property like a once-in-a-lifetime art project, the team commissioned artists representing Brazil’s wide range of artist expression, from street art to indigenous art, to create site-specific works for virtually every space in the property. The artists were given just one guideline: creativity that respects the past yet points to the future. The result is that the hotel is in effect Brazil’s next great contemporary art museum, one that celebrates the natural beauty, rich history, and diverse culture of its homeland. 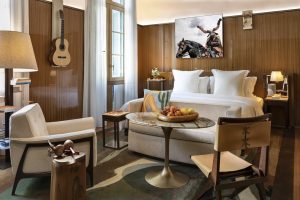 Throughout the property, art tells different stories of life in Brazil across various mediums including sculpture, paintings, tile work, drawings, textiles and rugs. A striking example can be found in the Rabo di Galo, a jazz bar featuring bespoke libations and classic Brazilian bar snacks alongside live music. The overall design of the bar was inspired by the classic jazz clubs of the 1930s, featuring leather furniture, dark woods and indirect lighting to create an intimate atmosphere. Artist Rodrigo de Azevedo Saad, locally known as Cabelo, spent a total of 68 hours hand drawing on the ceiling of Rabo di Galo, which portrays a certain schizophrenic art resulting in the magical and primitive universe of patterns that repeat themselves.

Part of a larger culinary renaissance happening in the city, Rosewood São Paulo brings six new dining venues to one of São Paulo’s most vibrant neighborhoods. Designed for a variety of different occasions, the hotel’s food and beverage offerings present a resounding and memorable combination of world-class gastronomic experiences served in immersive and unique spaces.

Rosewood São Paulo is committed to preserving Brazil’s natural environment with sustainability as one of the development’s guiding principles he property has committed to use 100 per cent renewable energy within a year, including on-site solar panels and renewable-sourced energy. Creating a positive impact on the local community and environment is key to Rosewood São Paulo’s values ​​and goals, and the building has been carefully planned to reduce the footprint wherever possible.